Sheer Strength Collection is a collaboration of six authors (including myself) with stories featuring a single mom. I am so honored that these ladies asked me to include Secret Maneuvers in this collection! I couldn’t have asked for better company in a project where ALL of the profits go to a charity that benefits single moms!

ONLY 99 CENTS FOR SIX BOOKS! 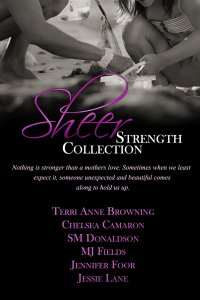 Terri Anne Browning
The Rocker That Savors Me

…has had a hard life. On her own at a young age, always having to do what needed to be done just to survive. Now she has two other people depending on her and she needs a job fast before they get evicted. A job interview introduces her to Jesse Thornton, the delicious drummer for Demon’s Wings. He reminds her of all the mistakes of her past, but is also her hope for the future.

…has never let anyone in. The only real family he has ever had are his band brothers and Emmie—the only women he has ever loved. But then Layla comes into his life and he would do just about anything to get one taste. Can he move past his own insecurities and allow this woman into his heart?

Chelsea Camaron
Merciless Ride
*Although this book is part of a series it can be read without reading books one and two.*

Mercy is no friend of mine. Karma, she has yet to show kindness to me.

The hits just keep on coming for Tessie Marie Harlow. She has never had an easy life. Her mom disabled, her dad long gone, and a single mom raising a rambunctious little boy, that’s Tessie’s world.

Her childhood aspirations to be a nurse long since disappeared after a college spring fling both blessed and burdened her with a baby boy. Dropping out of school, she returns to her hometown and begins to settle in. Getting the only job she could as a bartender she spends her days caring for her son and nights serving the Hellions Motorcycle Club and their affiliates.

Tired of waiting for Rex to grow up, she’s faced with the bane existence of her life until one night changes everything. In the darkest hour of her merciless ride through life, she’s saved by a quiet, laid back Hellion.

Andy ‘Shooter’ Jenkins has always been around. Too wrapped in Rex she has never really noticed him before. He has never been loud or known to have the girls hanging all over him. He is a mystery. A chance encounter brings him to her rescue not once but twice.

The Desert Ghosts Motorcycle Club are in town and bring their own brand of chaos right to Tessie’s door. Forced into her day to day life, Shooter is doing everything he can to shelter and protect her as lines are crossed and a war between two clubs begins.

Secrets revealed putting two brothers in the Hellions Motorcycle Club at a serious crossroads in their lives.

*Intended for mature audiences only* 18 and older
This series contains strong language, strong sexual situations, and violence. Please do not buy if any of this offends you. This is not meant to be a true or exact depiction of a motorcycle club rather a work of fiction meant to entertain.

Sloan Foster was always a good girl. An honor student in high school, she had big plans for herself, and then college happened. She thought she’d met the man of her dreams in hometown football star Lucas Smith. Then she had the earth shattering realization that dreams were just that…dreams. She found herself pregnant, right about the time he got drafted for the NFL and dropped her like a bad habit. Now a struggling 25 year old single mom, she works as a massage therapist and is determined to take care of her son, Sage, on her own, without a dime from him. No matter how many times he tries to pay her to ensure her silence.

Loxley Storm was raised by his mom, his dad was a dead beat he never knew. Growing up, he had anger issues and got into a lot of trouble for fighting. Thankfully, a man named Marco took him under his wing and helped him learn to control his anger by fighting…in the ring. Now 26, he is an MMA fighter working to become pro, helping run Marco’s gym along with his best friends, Sly and Huck. To the trio, getting tied down with women is something they don’t need. To blow off steam, they have the “hit it and quit it” motto.
Until an injury in a fight lands Lox on Sloan’s massage table, where sparks fly and neither can deny the attraction. The more pieces of Sloan Lox finds out, the more he respects her and her accomplishments as a single mom. Sloan is hesitant to trust another man, and she sure doesn’t want to risk her son getting hurt, but how long can she keep Lox at arm’s length? Will she let Lox in? Or will she let her past ruin her chances of finding love again?

While London is on a visit with her father, Emma visits a college room mate, a publicist in New York City she literally runs into Brody Hines, a British rock star. Emma finds herself attracted to him immediately and does not realize who he is.

Left in fates hands the two meet again and he knows he has to have her.

After losing his family in a tragic accident, Ramsey Towers has given up on his old life. He moved to a small town in West Virginia, where nobody will bother him about his painful past that he, himself, can’t stop reliving. Still needing to make money, he took a job as the town sheriff. Thinking he can just live out the rest of his life in solitude, he doesn’t associate with anyone outside of work.
No friends…no questions.
It’s how he wants it.

One late night call changes everything.

Vessa Jean thought she had a great life. After marrying her high school sweetheart and having two children, they settled into family life. While Vessa was both a mother and bartender, her tattoo artist husband was out sleeping with other women behind her back. The devastation of it all was just too much to handle, so Vessa decides to take the kids and leave her husband.

She had no idea how much her life was about to change.

An accident caused them to meet, but as Vessa tries to know more about Ramsey, she discovers he is haunted by his past. After exhausting all options, she decides to try a different approach. One way or another, she’s going to get to know the secretive sheriff.

Hustle Him is a rollercoaster of real life emotions. Sometimes it only takes a common interest for someone to open up again.

It can be read as a stand alone.

Some mistakes from the past haunt us forever… unless fate steps in with a second chance.

One ‘Dear John’ letter haunted Bobby Baker’s every living moment. It was the letter he’d stupidly written to his high school sweetheart, Belle, right after he had left to join the Army. The letter in which he’d told her that he wasn’t so sure they were ready for forever yet. Before he could let her know that the letter, and his second thoughts, were nothing more than a mistake, she disappeared from the small Georgia town they had both been raised in.
Fifteen years after the letter, Belle unknowingly walked back into Bobby’s life when her job as an ATF Agent forced her to work with a group of men secretly headed by the CIA to help her track down whoever was involved in funneling black market weapons to a drug cartel in Mexico.

Bobby planned to use this mission to try to soothe Belle’s hurt feelings while proving to her that their love was meant to be forever. He would use every dirty trick he’d learned since he had joined the Army to maneuver her back into his life for the long haul. Belle was not making it easy, though, as she continued to keep him at arm’s length in the hopes that mistakes of her own would never come to light. 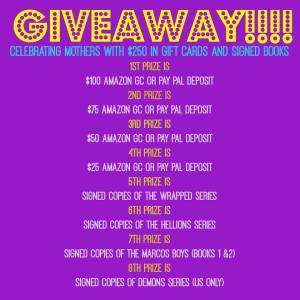