Roses are red, my life is blue, and the man I love is a fool.

Virginia Wellington has accepted her fate of being a pawn in her father’s criminal underworld games, especially if it keeps the people she loves safe. The problem is Lucas has discovered her secrets and the reason she walked away from him. Now he’s determined to save her, even if she doesn’t want to be saved.

Lucas Young now knows why the woman he’s loved since he was a boy disappeared from his life. It’s time he rescued his angel and showed her once and for all that by his side is exactly where she belongs.

*Warning:This is the third and last book in a three-part serial spin-off from the Ex Ops Series. All three books feature a piece of Lucas & Ginny’s story and lead directly into the next installment.IN OTHER WORDS, NO MORE CLIFFHANGER! YIPPEE! Also, be forewarned that this story will make you laugh, cry, and possibly throw your E-reader at the wall… more than once! You have been warned.  😉

For those of you who have NOT purchased any of the Sweet Serial books, this boxset is just for you! 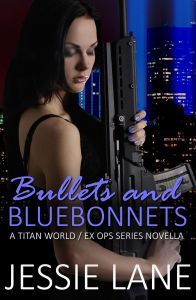 I am incredibly honored to announce that New York Times best-selling author Cristin Harber invited me to write in her Titan World!

What happens when Titan and Ex Ops work together?
Terror has gripped the NYPD. A rogue snipper took out, not only the NYPD’s SWAT snippers and police chief, but several others. Now they must turn to the only person they can trust: Jared Weston and the Titan Group.

There’s only one problem. The Titan Operatives are currently tied up with their own missions.
Unwilling to leave the NYPD hanging, Jared Weston cashes in a favor from Commander Jaxon Wall. Only, Jared doesn’t want to send Jaxon’s Ex Ops Team for the job; he wants to send in someone Jaxon has kept secret: his goddaughter, Billie Jean Beasely, one of the best snipers working for the FBI’s Hostage Rescue Team, if only her male counterparts would let her prove it. The NYC mission could finally give her that chance.

Thing is, Jaxon Wall isn’t willing to send his goddaughter in alone. He wants to send one of his own men to help her. Chase Anderson.

Will Chase turn out to be yet another man who thinks Billie is less of a shot just because she’s a woman? Or will Billie finally meet a man who realizes she loves her bullets as much as bluebonnets?